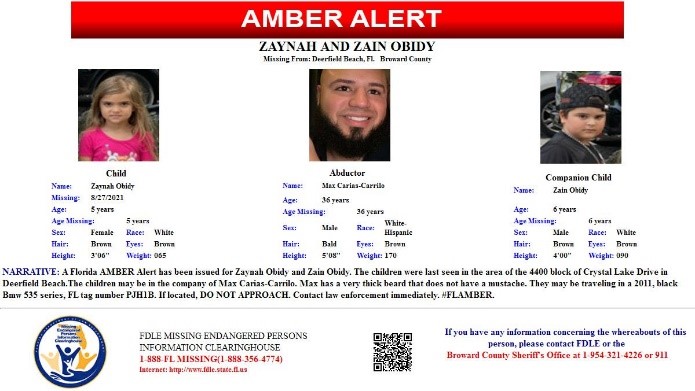 At approximately 8:19 p.m., Aug. 27, BSO deputies and Broward Sheriff Fire Rescue responded to an emergency call for medical assistance in the 4400 block of Crystal Lake Drive in Deerfield Beach. On scene, emergency crews made contact with an adult female victim suffering from multiple injuries. Through further investigation, deputies learned that the victim, who was transported to a local hospital to be treated for her injuries, had been assaulted by Carias-Carrilo. Detectives later determined Carias-Carrilo had taken 5-year-old Zaynah and 6-year-old Zain from the residence.
According to investigators, Carias-Carrilo is not the father of the two missing children. Zaynah is approximately 3 feet 6 inches tall and weighs about 65 pounds. Zain is about 4 feet tall and weighs approximately 90 pounds. Both children have brown hair and brown eyes.
The children may be traveling with Carias-Carrilo in a 2011 black BMW 535 series with Florida tag PJH1B. He is described as a 36-year-old Hispanic male approximately 5 feet 8 inches tall with a very thick beard. He weighs about 170 pounds.
The Florida Department of Law Enforcement has issued an Amber Alert for Carias-Carrilo and the two missing children. Anyone with information regarding their whereabouts is asked to contact FDLE at 1-888-FL-MISSING (356-4774) or BSO investigators at 954-321-4226 or dial 911.