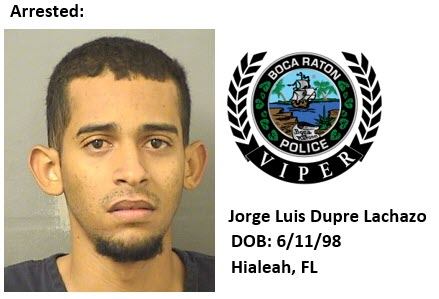 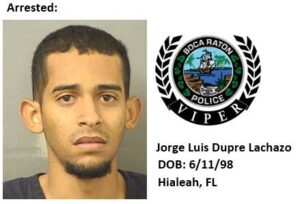 Boca Raton, FL – On Monday, August 19, 2019 at approximately 9:15 am, Boca Raton Police and Fire Rescue responded to a home in the Colonnade at Glen Oaks for a medical call. Fire Rescue personnel found an elderly female unconscious and suffering from burns and trauma injuries. The victim was immediately transported to Delray Medical Center.

Boca Raton officers found David Gonzalez, a driver for a delivery provider, on the scene. Gonzalez said that he and his co-worker, Jorge Luis Dupre Lachazo, delivered a washer and dryer to the victim’s home for Best Buy. At one point during the visit, Gonzalez went outside to make phone calls to the office. Lachazo remained inside of the home to speak with the victim about the new appliances. After hearing screams from the house, Gonzalez entered the home and saw blood and the victim on the floor.

Gonzalez went outside and called 911. Lachazo got into the delivery truck and drove away. A responding Boca Raton police officer saw the truck leaving the neighborhood and stopped it.

Lachazo has been charged with Attempted Second-Degree Murder, Aggravated Battery with a Deadly Weapon on a Person over 65 Years of Age and Arson. The victim is in extremely critical condition. The investigation is ongoing and if you have any information about this case, please contact Det. Scott Hanley at 561-338-1344.