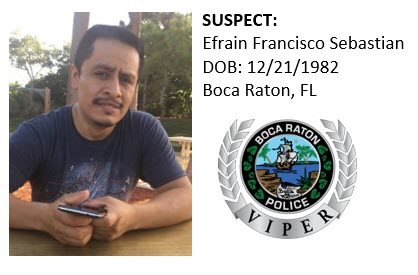 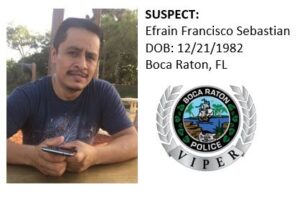 Boca Raton, FL – On May 19th, 2019, at 4:38 am, Boca Raton Police responded to a hit-and-run crash, which occurred at 6401 W. Glades Road. Witnesses reported a pick-up truck was traveling eastbound along W. Glades Road when it collided with a pedestrian in the travel lanes. The driver left the scene without stopping. The pedestrian, 44-year-old Luis Felipe Rodriguez Jr., was transported to Delray Medical Center where he later died.

Cameras captured the suspect vehicle, a Nissan Titan, at the Florida Turnpike Toll Plaza and on W. Glades Road, shortly before the accident occurred. On May 20, 2019, a Boca Raton Police lieutenant spotted the vehicle on the bed of a tow truck that was traveling along Spanish River Boulevard. The Nissan had front end damage and it was determined the vehicle was being transported to a repair shop.

Based on the evidence gathered, an arrest warrant was obtained for Efrain Francisco Sebastian for Leaving the Scene of a Crash Involving Death. If you know the whereabouts of Sebastian, do not approach him and call the police. If you have any other information regarding this investigation, please contact Traffic Homicide Investigator Andrew Crawford at (561) 620-6227.