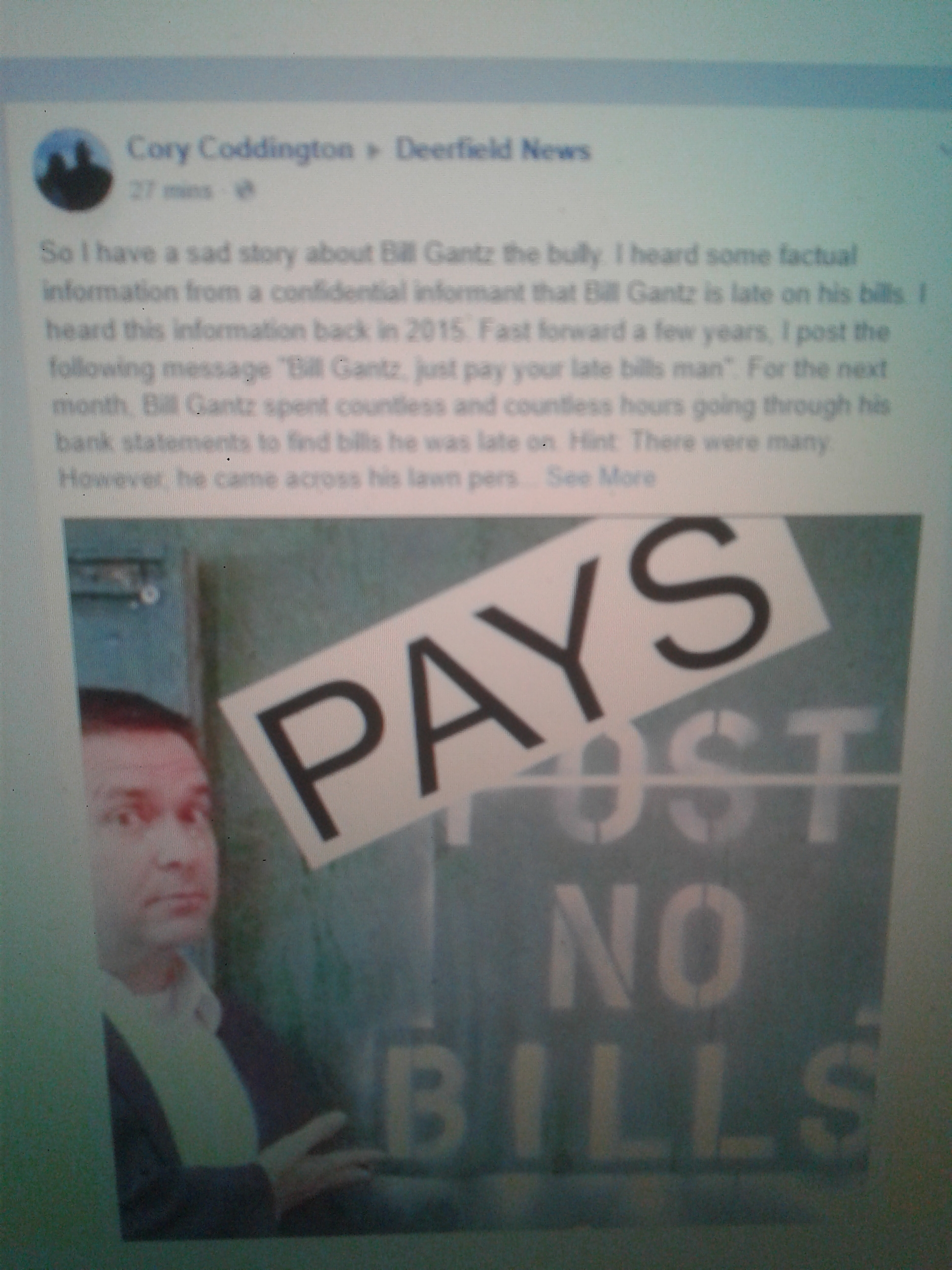 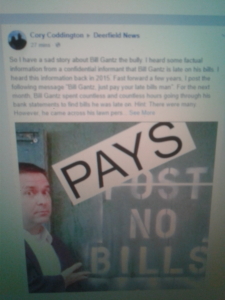 Deerfield-News.com-Deerfield Beach-Yesterday in response to a reader request to post a story about Mayor Ganz we published the following.

So I have a sad story about Bill Gantz the bully. I heard some factual information from a confidential informant that Bill Gantz is late on his bills. I heard this information back in 2015. Fast forward a few years, I post the following message “Bill Gantz, just pay your late bills man”. For the next month, Bill Gantz spent countless and countless hours going through his bank statements to find bills he was late on. Hint: There were many. However, he came across his lawn person who also happens to be my lawn guy. He came to the conclusion that his lawn guy MUST be feeding this information to him. Why? Because Bill Gantz was LATE on paying his bills, and specifically to this person. So now Bill Gantz the Bully is threatening to sue me and my confidential informant. Why? Becuase he is late in paying his bills and he is trying to save face. So now he is inventing this story that I somehow hacked some information of his, totally twisting the story like a Bully would. I’ve already retained a lawyer. But in passing, I would like everyone to repost this story on your local blogs. I’ll even compensate you $50 for reposting this story on your Deerfield news websites. Just send me the link, and I”ll send you the cash. I will not be bullied by Bill Gantz. I have unlimited amounts of Cash to fight this Bully. Bill, sometimes you just let things go, especially when you are wrong.

Today we found the following and feel it is newsworthy.Anytime you piss of a citizen enough for them to register a domaoin and publish a website,well you must have done something.
Here is a link to the new website.
http://www.billgantzdoesnotpayhisbills.com/
From Deerfield Beach Politics Facebook

Cory CoddingtonGroup Admin Got a new website up Bill Gantz. I’ll be keeping this and the facebook page up to date with your shenanigans. Personally, if I were you, I’d prob apologize to the person you were late on your bills, and suck up the fact that you are a late bill payer. Unfortunately there is nothing you can do to stop me from continuing to spread this information. What’s done is done. I’ve never let a Bully influence me. As soon as Google Ad’s approves my Ad, this website will be the first search in Google for everyone in Florida. http://billgantzdoesnotpayhisbills.com

Bill Gants does not pay his bills – Just another Bully Politician who poked the wrong bear.
Home This is a page about a Bully who doesn’t pay his bills. In 2015 I was privy to information about BIll Gantz who was late on paying his bills. Fast forward to 2017, I posted a simple comment on Facebook under a Deerfield Topic that said ” Bill Gantz, just pay your bills”. See, Bill Gantz is cons…
BILLGANTZDOESNOTPAYHISBILLS.COM
LikeShow more reactions

Cory CoddingtonGroup Admin Got word Bill Gantz has retained Chaz Stevens to help with his bill paying issue. Holy hell this story gets better as the day goes on.

This is a page about a Bully who doesn’t pay his bills. In 2015 I was privy to information about BIll Gantz who was late on paying his bills.

Fast forward to 2017, I posted a simple comment on Facebook under a Deerfield Topic that said ” Bill Gantz, just pay your bills”. See, Bill Gantz is constantly late on his bills. However, he wanted to find out just who got this information, so he spent several months going through bank statements calling all his companies who do business with them, and threatened them claiming they were feeding me information. BIll Gantz fired these people because of a single comment I made on Facebook about him not paying his bills. Bill Gantz has bully tactics.

He’s embarrassed and he is threatening litigation. If Bill could sue people for spreading factual information, we would not have an American Media. So now Bill is threatening to sue me for a fact I overheard. Its my duty to make sure this information gets out. In addition, I’ll send $50 to each person who reposts this story on their blog or website. Just send me the link. It must be deerfield politics related.

Char Hut As Good As Ever