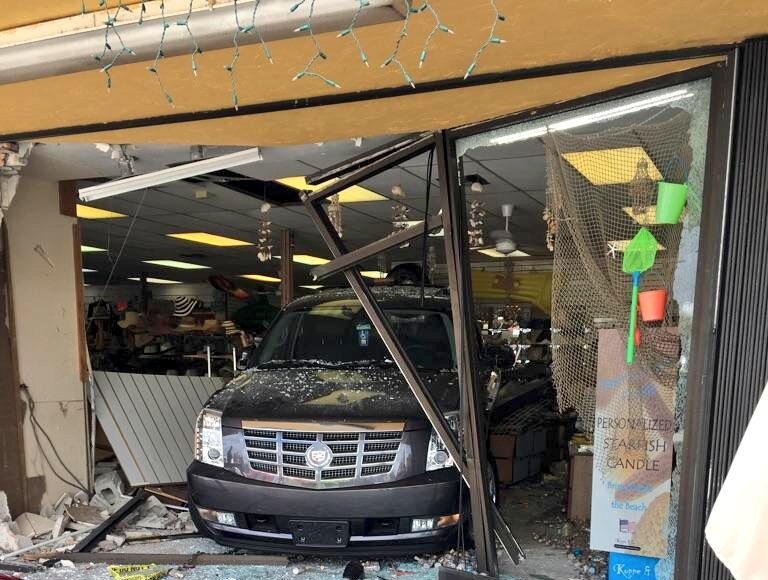 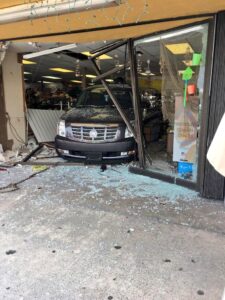 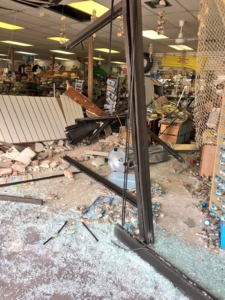 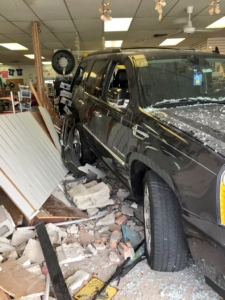 One of Deerfield Beaches most popular souvenir shops along the beach has a new drive thru.the beachcomber located on one of Deerfield Beaches premier beach front shopping center.The stores front survived a tremendous blow when the elderly driver backed up in reverse quite quickly ramming through the front windows and doors.

A Cadillac Escalade stuck in reverse gave The Beach Comber a new drive thru this afternoon.

Early this afternoon along the beach promenade a Cadillac went through the front windows and door according to BSO Fire Rescue..

BSO Fire Rescue PIO Mike Jachles reports that even though there were a lot of people nearby eating at restaurants, there were no reported injuries. The Beachcomber is located at 2080 NE 2nd Street at Deerfield Beach,is a popular shop with tourists visiting Deerfield Beach and it’s pier.

Apparently the driver who placed the car in reverse and crashed is in their late seventies.

BSO has now reported the driver Gregory Sladek was backing up his car from the Whales Rib parking lot when it was stuck and caused him to hit a Cadillac Escalade.Subsequently the Escalade smashed through the doors and windows of The Beachcomber.

Deerfield-News.com has an on going series of “Driving While Old “and the dangers senior citizens cause on Florida’s roadways.

Stay tuned for  our ongoing series which we will soon be consolidating to www.drivingwhile old.com to include all episodes pictures and videos.

Our series will continue with other local accidents caused by elderly drivers.Deerfield-News.com has focused on The State of Florida’s lack of a safety mechanism for concerned family members or friends of elderly drivers who should not be driving anymore.Our reporting has showed it is very difficult if not impossible to take the keys away from an elderly driver. In Florida decades of lobbying efforts including by AARP and others have succeeded in stringent laws. In our state it is almost making it impossible to retest or to have any mechanism available to take the keys (in a DMV approved administrative hearing ) from someone who should not be driving. As of this writing no,one has come up with what are the alternatives.

We realize this is a sensitve subject and some may think age discriminatory,and or unconstitutional,but driving is not a right.

Usedtires.com Leading The Way With Used Tire Sales On The Internet From Deerfield Beach